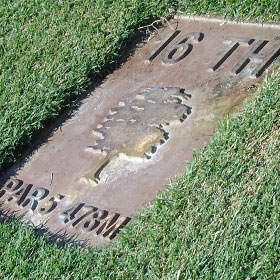 Elanora is an Aboriginal word meaning “home by the sea”. It is true that the original inhabitants of this country seldom made a fixed abode, but the name captures the essence of a Country Club that has acted as a home from home to its members for ninety two years. Elanora Country Club holds something that is precious – a bond of union and friendship that one associates with a warm and happy family. Our members are conscious of a family pride in its origin and early development.

The Elanora Country Club was formed on 19th October 1928 when the first meeting of the Committee took place. The first nine holes were opened on 29th May 1929 and the second nine in 1930. Elanora was developed as a Country Club with social and recreational facilities but golf was to provide the main sporting interest. As part of a real estate development it was anticipated that many members would choose to live nearby so as to enjoy the facilities of the Club especially in their retirement. 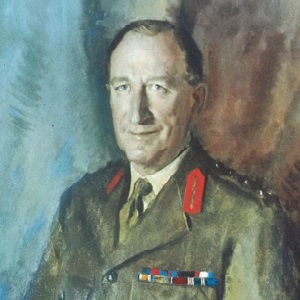 The founder, Brigadier T. A. (John) Playfair built his home in this area and the Club remains as a memorial to his enterprise and personality. An old wooden house was leased to serve as a temporary Clubhouse until the new and present Clubhouse was built and opened on 7th May 1938 . The site chosen for Elanora has panoramic views of the coastline north of Sydney but the original land was rocky and hilly and covered with stunted vegetation.

The Members came mainly from the Eastern Suburbs and the long journey did not deter them especially on the weekends. The social functions and Sunday luncheons were overflowing. The concept of having a Country Club associated with residential homes for its Members attracted great interest but the developers and the Club were soon faced with a great economic depression and only two homes were built. During the later years of the War Elanora became a popular resort for the officers of American forces and for those of the British Navy stationed in Sydney. 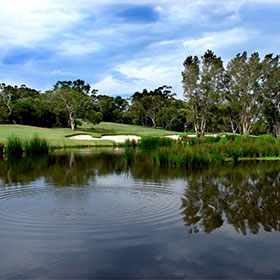 On the Course, water has always been essential. Perhaps never so much as at present. Originally water was pumped from Powder Works Creek on the Club’s property to storage tanks and reticulated there. From dams like the extension of Powder Works Dam (1946), 2nd green dam (1958), 7th fairway dam (1971) all provided water along with the Clubhouse being connected to the Water Board in 1958.

The new 86 megalitre dam built in 2000 was designed to meet Elanora’s requirements even under the most severe drought conditions and has served the Club well under the current unpredictable weather patterns. As part of the new course reconstruction a number of wetlands, 5th and 14th, were constructed to meet environmental requirements associated with excess run off and chemical breakdown. Further fairway drainage has been installed to assist with both overall drainage and better catchment.

In 2019 the short term phase of the water strategy document was implemented, where the club water harvesting infrastructure was upgraded and the capacity increased, including pumps, pipes, water meters and power sources.  This also involved the harvesting of water from the 5th wetland, a source of water previously lost. Previously the club had the ability to harvest 2.4ML per 24 hours, with all of the recent upgrades this harvest rate increases to 9.4ML per 24 hours.  This will enable the harvest of water to be much faster in heavy rain events, and will also eliminate some risk of pipe failure in the old pipes. 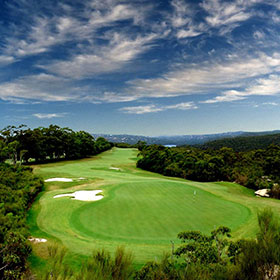 At the Annual General meeting in July 2000 the members of Elanora voted for and approved the Master Plan which addressed the major safety issues of the course with the inclusion of a completely new 17th hole and a different order of play for the second nine holes. The significant changes on the first nine, were that the 6th hole became a par five while the 7th became a par three with the intent of creating more balance between the front and back nines. All fairways were grassed with couch and all greens rebuilt and grassed with a hybrid A1 bent grass. A substantial practice facility was also included which saw the first and ninth holes being reversed. Environmental wetlands were also part of the plan.

Work began on the back nine in March 2002 and opened for play in May 2003. Work on the front nine began in December 2003 and opened in April 2004 and became the focus of the Club’s seventy fifth anniversary celebrations in May 2004. The members celebrated with great enthusiasm and the new course has allowed them to enjoy even further the natural beauty of Elanora’s special setting or a Home By The Sea.

Elanora Home By The Sea

On the northern hills of Sydney there’s a place I yearn to be.
Its name is Elanora, which means home beside the sea.
It’s a country club, a refuge, it’s a home away from home.
It’s among the finest places that I think I’ve ever known.
It dwells in native bush land with escarpment at its crown.
No traffic noise disturbs it, just the birdlife and their sounds.
There is tennis and there’s bowling, you can even play croquet.
And if you wish to overnight, a lodge in which to stay.
The membership is gracious and friendships there abound.
You’ll never hear an angry voice and rarely see a frown.
And that’s because they all observe the simple rule that states:
“Bring your smile and bring your laughter, leave your problems at the gate”.
The staff are very special, they’re professional and keen,
From those who cook or serve the drinks to those who mow the greens.
The culture of the Club relies on mutual respect,
It’s a spirit staff and members both exhibit and expect.
The members and the ladies are distinctive in the way
They like to organize themselves and when they choose to play.
But when they join together these differences are small
And mixed events must surely be most popular of all.
The men compete for golf balls and in groups of four they play,
And the match within is willing and the highlight of the day.
But mighty men can falter when they find that they’re the one
Whose final putt determines whether balls are lost or won.
So when I am reflecting and explore my grateful mood,
I contemplate these many things that lead me to conclude
That if there is an afterlife, I hope that it will be
Like this place that I call heaven, my Home beside the sea.
Julian Hercus